The prophet Jeremiah lived from 627-586 B.C.
He was called by God at the age of 23 to prophesy in Jerusalem during a very difficult  time.
The kings, priests, and people had put much more interested in politics than God.
They had begun to trust in other countries to save them from their enemies.  They had become subjects of Babylon and were paying annual taxes to this foreign power so they would have a feeling of security.
Eventually they lost the land and everything that God had led them to and they were exiled to Babylon.
God had given them the Prophet Jeremiah to give them courage.  He told them God would not abandon them but in His Mercy would send a Shepherd to take care of them.  Jeremiah was predicting the coming of Christ.
Sometimes when we might feel down and out it is so easy to thinks that God has abandoned us.  This first reading can give us courage to realize that God has given us Jesus Christ to assure us of eternal life.  In spite of all the problems and difficulties we face God will never abandon us just as He did not abandon his Chosen people in spite of them turning away from Him.

In this Gospel we hear that Christ comes every day for each of us
especially at those moments in our lives when we feel we are sheep without a shepherd.
He will not abandon us... 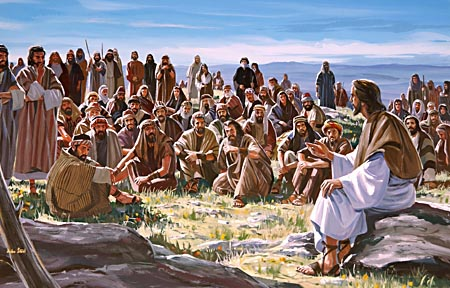 ...just as He did not abandon the crowd
that has followed Him and the Apostles
who had gone to rest and reflect.
Return to vicardoug.com