Received in an email today. Enjoy

A wealthy man and his son loved to collect rare works of art. They had everything in their collection, fromPicasso to Raphael. They would often sit together and admire the great works of art.
When the Vietnam conflict broke out, the son went to war. He was very courageous and died in battle while rescuing another soldier. The father was notified and grieved deeply for his only son.

About a month later, just before Christmas,
There was a knock at the door. A young man stood at the door with a large package in his hands.
He said, 'Sir, you don't know me, but I am the soldier for whom your son gave his life. He saved many lives that day, and he was carrying me to safety when a bullet struck him in the heart and he died instantly... He often talked about you, and your love for art.' The young man held out this package. 'I know this isn't much. I'm not really a great artist, but I think your son would have wanted you to have this.'

The father Opened the package. It was a portrait of his son, painted by the young man. He stared in awe at the way the soldier had captured the personality of his son in the painting. The father was so drawn to the eyes that his own eyes welled up with tears. He thanked the young man and offered to pay him for the picture.. 'Oh, no sir, I could never repay what your son did for me. It's a gift.'

The father hung the portrait over his mantle. Every time visitors came to his home he took them to see the portrait of his son before he showed them any of the other great works he had collected.

The man died a few months later. There was to be a great auction of his paintings. Many influential people gathered, excited over seeing the great paintings and having an opportunity to purchase one for their collection.

There was silence...Then a voice in the back of the room shouted, 'We want to see the famous paintings. Skip this one.'

But the auctioneer persisted. 'Will somebody bid for this painting? Who will start the bidding? $100, $200?'

Another voice angrily. 'We didn't come to see this painting. We came to see the Van Gogh's, the Rembrandts. Get on with the real bids!'

But still the auctioneer continued. 'The son! The son! Who'll take the son?'
Finally, a voice came from the very back of the room. It was the longtime gardener of the man and his son. 'I'll give $10 for the painting...' Being a poor man, it was all he could afford.

'We have $10, who will bid $20?'
'Give it to him for $10. Let's see the masters.'
The crowd was becoming angry. They didn't want the picture of the son.
They wanted the more worthy investments for their collections.
The auctioneer pounded the gavel.. 'Going once, twice, SOLD for $10!'
A man sitting on the second row shouted, 'Now let's get on with the collection!'

The auctioneer laid down his gavel.

'I'm sorry, the auction is over.'
'What about the paintings?'
'I am sorry. When I was called to conduct this auction, I was told of a secret stipulation in the will... I was not allowed to reveal that stipulation until this time.

Only the painting of the son would be auctioned. Whoever bought that painting would inherit the entire estate, including the paintings.
The man who took the son gets everything!'

God gave His son over 2,000 years ago to die on the Cross. Much like the auctioneer, His message today is: 'The Son, the Son, who'll take the Son?'
Because, you see, whoever takes the Son gets everything! 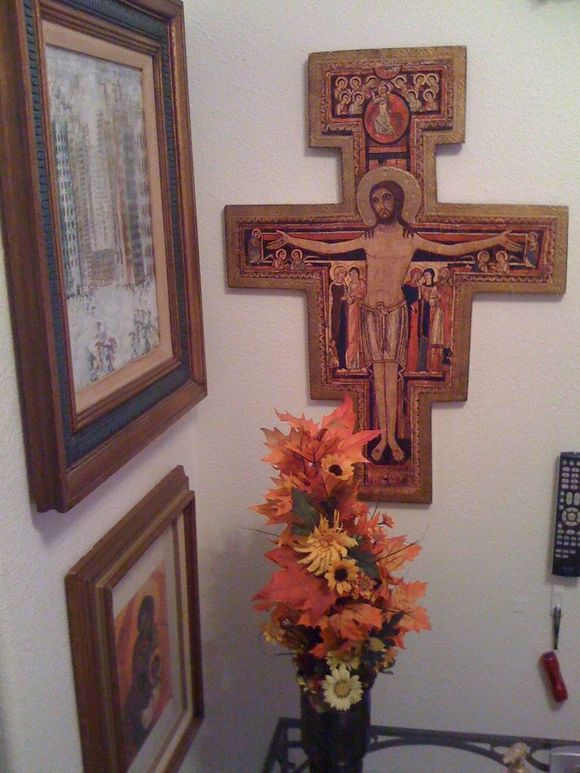 Second Sunday of Advent Cycle B

Review the Readings for this Sunday

My commentary will be published by this coming Thursday 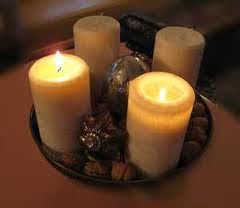 Isaiah addresses a people who have been in exile for some time.  He lets them know that relief is coming and not in the way they expected.  King Cyrus, a pagan king, will conquer Babylon and release the Jews and allow them to return to Jerusalem.  Wow!  What a miracle. 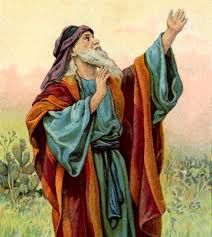 I know for those difficult times I find myself in sin, in doubt, in conflict, much like the Jews in exile, I can have hope.  God will not abandon me.  In fact He will act in ways and through people I would not have expected to bring me God.  I know that even the ones I often judge are the exact same person that gives me courage in spite of my sins.  I have met a man here is the desert who is filled with all kinds of problems and right now he is the one who has helped me the most and given me courage to see my imperfections and sins.  Amazing. 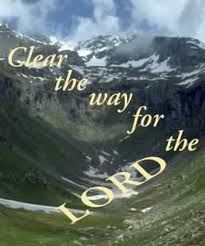 This is the season we prepare for the coming of the Lord.  This is the time we make a path, a way, for the Lord.  In some sense that is why Advent is also a time of deep self reflection of my sins, past and present.  It is not just putting up Christmas decorations, shopping for presents, cooking pies, cakes, cookies that prepares the way for the Lord. 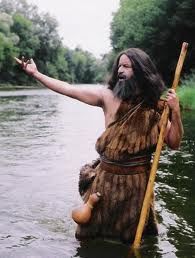 This coming week watch for the one who will be like St. John the Baptist for you.  This is the strange person, or difficult person ( John the Baptist must have seemed strange because of his dress and his living in the wilderness and his eating habits, etc.),that will call us to conversion, a call to look at our sin .

This is the one process for sure that prepares the way for the Lord; for if I can't see my sin, then I really must think that deep down I don't need God.  That was the difficulty the Scribes and Pharisees were having with Christ.  They were pretty well convinced that they did not sin.

This Gospel reading from Mark will give us courage to see what is really essential in preparing for the Lord.  Certainly this was true for the Jews in Exile.  They had time to reflect on how they had sinned and come to know that God would not abandon them. 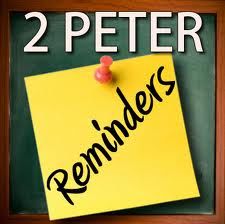 In the second letter of Peter we hear that that Lord wants us all for His own.  We are his people, called by name at our Baptism.   He will not abandon us.  I know that He comes everyday.  Sometimes He is in the person or the event that seems so difficult.  How could He be in the one that shows me my selfishness, my lack of mercy and compassion?  But as we can see in these readings, God will always be our caregiver, coming in ways we do not expect.

Therefore, beloved, since you await these things,
be eager to be found without spot or blemish before him, at peace.

Checking out at the store, the young cashier suggested to the older woman
that she should bring her own grocery bags because plastic bags weren't
good for the environment.

The woman apologized and explained, "We didn't have this green thing back
in my earlier days."

The clerk responded, "That's our problem today. Your generation did not
care enough to save our environment for future generations."

She was right -- our generation didn't have the green thing in its day.

Back then, we returned milk bottles, soda bottles and beer bottles to the
store. The store sent them back to the plant to be washed and sterilized
and refilled, so it could use the same bottles over and over. So they
really were recycled. But we didn't have the green thing back in our day.


Back then, we washed the baby's diapers because we didn't have the
throw-away kind. We dried clothes on a line, not in an energy gobbling
machine burning up 220 volts -- wind and solar power really did dry our
clothes back in our early days. Kids got hand-me-down clothes from their
brothers or sisters, not always brand-new clothing. But that young lady is
right. We didn't have the green thing back in our day.

Back then, we had one TV, or radio, in the house -- not a TV in every
room. And the TV had a small screen the size of a handkerchief (remember
them?), not a screen the size of the state of Montana. In the kitchen, we
blended and stirred by hand because we didn't have electric machines to do
everything for us. When we packaged a fragile item to send in the mail, we
used wadded up old newspapers to cushion it, not Styrofoam or plastic
bubble wrap. Back then, we didn't fire up an engine and burn gasoline
just to cut the lawn. We used a push mower that ran on human power. We
exercised by working so we didn't need to go to a health club to run on
treadmills that operate on electricity. But she's right. We didn't have
the green thing back then.

We drank from a fountain when we were thirsty instead of using a cup or a
plastic bottle every time we had a drink of water. We refilled writing
pens with ink instead of buying a new pen, and we replaced the razor
blades in a razor instead of throwing away the whole razor just because
the blade got dull. But we didn't have the green thing back then.

Back then, people took the streetcar or a bus, and kids rode their bikes
to school or walked instead of turning their moms into a 24-hour taxi
service. We had one electrical outlet in a room, not an entire bank of
sockets to power a dozen appliances. And we didn't need a computerized
gadget to receive a signal beamed from satellites 2,000 miles out in space
in order to find the nearest pizza joint.

But isn't it sad the current generation laments how wasteful we old folks
were just because we didn't have the green thing back then?

Please forward this on to another selfish old person who needs a lesson in
conservation from a smart*ss young person. 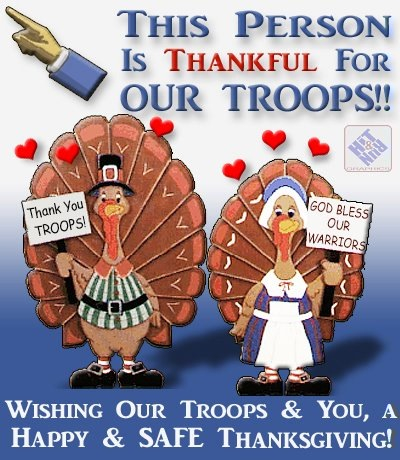 Twas the Month before Christmas

Twas the month before Christmas

When all through our land,

Not a Christian was praying

Nor taking a stand.

See the PC Police had taken away

The reason for Christmas - no one could say.

The children were told by their schools not to sing

About Shepherds and Wise Men and Angels and things.

It might hurt people's feelings, the teachers would say

Yet the shoppers were ready with cash, checks and credit

Pushing folks down to the floor just to get it!

CDs from Madonna, an X BOX, an I-Pod

Something was changing, something quite odd!

In hopes to sell books by Franken & Fonda.

As Targets were hanging their trees upside down

At Lowe's the word Christmas - was no where to be found.

At K-Mart and Staples and Penny's and Sears

You won't hear the word Christmas; it won't touch your ears.

Are words that were used to intimidate me.

On Boxer, on Rather, on Kerry, on Clinton !

At the top of the Senate, there arose such a clatter

To eliminate Jesus, in all public matter.

And we spoke not a word, as they took away our faith

Forbidden to speak of salvation and grace

The true Gift of Christmas was exchanged and discarded

The reason for the season, stopped before it started.

So as you celebrate 'Winter Break' under your 'Dream Tree'

Sipping your Starbucks, listen to me.

Choose your words carefully, choose what you say

Please, all Christians join together and

wish everyone you meet

Christ is The Reason' for the Christ-mas Season!