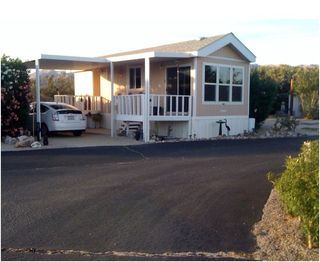 It looks like I will spend the entire month of August here at my place in the desert.  No more coming in for weekend masses during August.

I have been informed that St. Angela has missionary priests coming in during the month of August so I will not be needed to help with the weekend masses.

Please continue to keep me in your thughts and prayers.  All of you will be in mine.

You can reach me by email at

Retirement to the Desert...My July Experiences 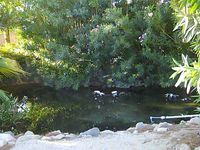 The best part of retirement so far is that there is plenty of time to pray and study scripture.  That is also the highlight of the day.  It is amazing how God continues to speak to me in the daily mass readings.

There is always a 2 hour walk in the desert.  Of course that means starting at 5 or 6 in the morning before the 100 plus heat takes over.  I came upon a pond that was very peaceful with crickets and all.  What a moment to pray and reflect on the beauty of the desert. 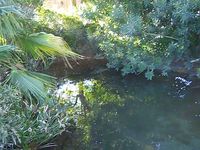 I also have daily visitors in the morning and in the evening...They come for food.  The manager and his wife are great at feeding them.  We can get as many as 40 or 50 at a time.

Many thanks for your prayers.  You will always be in mine.  It looks like I will continue to be at St. Angela's for weekend masses off and on.  So see you soon.

Are you willing to give your life for the other?

Maria Goretti was the third of seven children of a poor peasant family living near Corinaldo in the province of Ancona in Italy; owing to extreme poverty the family later migrated to a village near Anzio.
In order to make ends meet, Maria’s father entered into partnership with a man called Serenelli, and shared a house with him and his two sons, one of whom was called Alessandro. Her father died in 1900, when Maria was ten.
Maria impressed everyone with her radiant purity. She was naturally pious, kind, and helpful. She was also outstandingly beautiful – and Alessandro Serenelli was an outstandingly passionate and undisciplined man.
She resisted his attentions, which only made her the more desirable, and narrowly managed to escape a serious sexual assault, which he made her keep secret by means of threats of murder.
A month later Alessandro arranged things so that he would be alone in the house with Maria; and he had a dagger. She tried to resist, begging him to have care for his immortal soul, but he thrust a handkerchief into her mouth to prevent her from crying out, tied her up, and threatened her with the dagger. She could, the theologians say, have consented then, with no danger to her soul; but her love of purity was too great. Alessandro, enraged, stabbed her fourteen times.
She did not die, though her entrails were hanging out from one of her abdominal wounds. She was taken to hospital, seven miles of bad road in a horse-drawn ambulance, and was operated on for more than two hours. She lived for twenty hours more, became a Child of Mary, received the Last Sacrament, and specifically forgave her murderer. She died in the afternoon of 6 July 1902, at the age of eleven years, eight months, and twenty days.
Alessandro narrowly escaped being lynched, and was tried and sentenced to thirty years’ penal servitude with hard labour. For the first seven years or so he maintained a cynical and defiant attitude, but he repented, and dreams of Maria herself figured largely in his repentance. (You might say, he pretended to repent so as to get his sentence reduced – but the most sceptical experts were convinced, and he had to remain in prison for another twenty years, which is a long time to sustain a pretence).
Maria was beatified in 1927. Alessandro was released in 1928; and he and Maria’s mother received Communion side by side on Christmas Day 1937, and they spent Christmas together.
Maria was canonised in 1950. Her mother was present at the ceremony, the first time this has ever happened. Some people say that Alessandro was there too, others not; but it is certain that he spent his last years in a Capuchin monastery: he died in 1970.
The trouble with purity nowadays is that we don’t believe in it – or at least we say we don’t. When we read of one saint or another that he or she was a virgin, we are more inclined to deride than to admire. And that is sad: here is not the place for a long disquisition on sex, but suffice it to say that sex is a valuable thing that should not be squandered or used trivially; any more than one should use champagne for cleaning floors.
Even if we find it difficult to admire virginity as such – even when it is a positive virtue and not a negative one – we should still, even as pagans, admire purity. For whatever alternative set of moral standards one may adopt, purity, decency, and self-respect are all-important and always will be. (The standards of what is or is not decent may be different – in Victorian times it is said that it was indecent to let ankles be seen, while a few centuries earlier large codpieces were the fashion for men – but decency itself is always there, however the ways of measuring it may change).
One may admire or praise Maria Goretti for all manner of other things if one likes – some people have a great fondness for sentimentality, melodrama, and wet plaster saints – but at the end of it all, the heroic virtue that she exhibited was a blazing affirmation of purity and integrity. Even if her standards are not ours, we must still have standards of some kind; and if we are faced with a threat to them, we must defend ourselves with the same passion that she showed.
To behave otherwise, to tell ourselves “well, it doesn’t matter really”, is to commit slow moral suicide.