Retirement Begins In July...Out to my desert Park Model

I spent a great deal of my four week vacation getting set up for retirment out here in the desert.

Here is my front porch with a fountain and a view of the mountains.  Great to wake up and watch the sun light up the mountain

I have installed a few statues.  I really like this one of a monk.  It is also a fountain and is great to relax and reflect with.  Flowing water helps me to pray and reflect especially when the temperature is in the 100's

This is a statue of St. Joseph that I have had for many years and finally took it out to the desert.  It looks great lit up by my solar light system

My trailer is in the middle of nowhere.  Plenty of space to walk and think.  It is great to go out for a walk in the early morning as the sun comes up or in the cooler evening when it goes down.

A GREAT STORY TO THINK ABOUT WHEN JUDGING THE OTHER

cookies, settled in a chair in the airport lounge and began to read her book.

the cookie bag between them. Not wanting to make a scene, she read on, ate

the cookies she got more irritated and said to herself, “If I wasn’t so nice, I’d

blacken his eye!” With each cookie she took, he took one too. When only one

was left, she wondered what he would do. Then with a smile on his face and

a nervous laugh, he took the last cookie and broke it in half. He offered her

half, and he ate the other. She snatched it from him and thought, “Oh brother,

this guy has some nerve, and he’s also so rude, why, he didn’t even show any

gratitude!” She sighed with relief when her flight was called. She gathered her

belongings and headed for the gate, refusing to look at the ungrateful “thief.”

She boarded the plane and sank in her seat, then reached in her baggage to

fetch her book, and what she saw made her gasp with surprise. For there in

front of her eyes was her bag of cookies. Then it dawned on her that the

cookies she ate in the lounge was the man’s and not hers, that the man was

not a thief but a friend who tried to share, that she was the rude one, the

ungrateful one, the thief.

The cookie thief story reminds us, that it often happens that the one pointing the accusing finger turns out to be the guilty one, that the complainant sometimes turns out to be the offending party. In the cookie story, the woman believed she was such a wonderful person to put up with the rudeness and ingratitude of the man sitting beside her. In the end she discovered that she was the rude and ungrateful one and the man was wonderfully friendly? Well, because it is easier to hear the other person than it is to hear yourself snoring.

What is the purpose of struggles and difficulties we all go through? 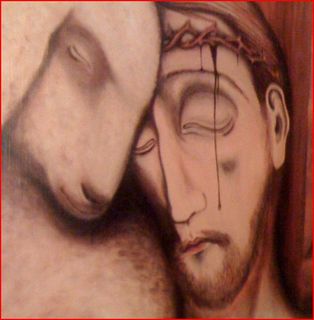 My time in the desert on vacation, has been a time to reflect on the past few years of my life.

Why the difficulties and struggles.

Friday's (6-4-10 ) reading 2 Timothy 3:10-17 has given me somethings to think about as I look back on the struggles of the past few years, being moved from one parish to another.

Why should I not expect struggle and persecution?

Is it not a part of the Christian way?

Anyone who wants to live a godly life in Christ can expect to be persecuted.

It is through many persecutions that we must enter the Kingdom of God (Acts 14:22)

Help me Lord to see the value of struggles and persecutions that I meet and not to be scandalized by them and to truly know they are the way to the Kingdom.